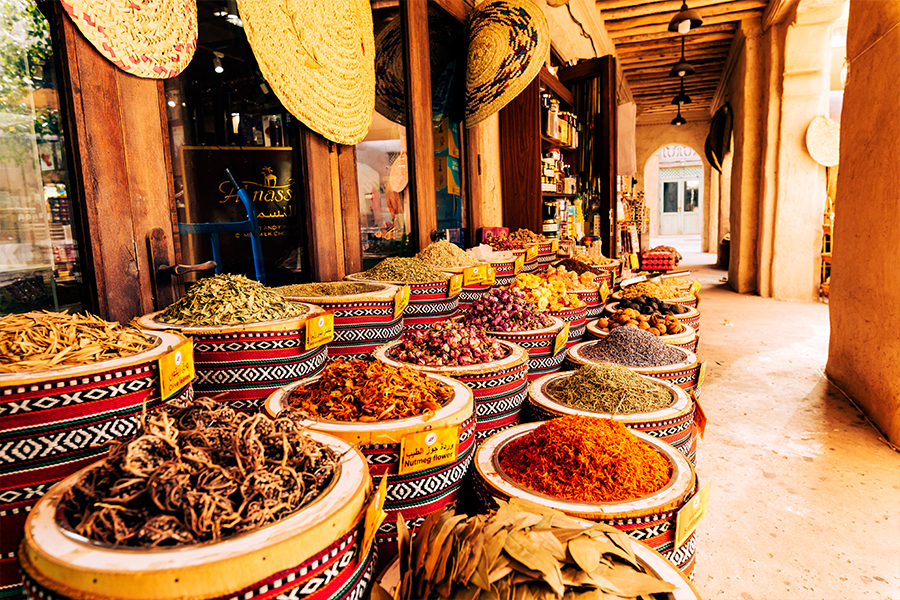 What would cooking be without spices? Recipes would certainly be a lot less colourful and tasty. But over the course of history, spices have provided more than just a dash of colour or flavour: they’ve also been considered symbols of wealth and luxurious living. As soon as spices arrived in Europe, they quickly became a staple of meals for the wealthy elites and a status symbol. Historically, they’ve also been used in the preservation of foods, such as meat, and to provide delightful nuances to countless recipes of international gastronomy. But which spices are most common in Arabic cuisine? In this post we’ll explore the seven most essential spices in Middle Eastern kitchens: cardamom, cinnamon, black pepper, cumin, cloves, nutmeg, and coriander.

Cardamom is considered one of the oldest spices in the world. Originally from southern India and Sri Lanka, it now also grows in other countries around the world, such as Guatemala and Tanzania. There are records of ancient Egyptians chewing cardamom to freshen their breath.

In powdered form it is used to season stews and rice recipes – like the cherished Saudi dish, saleeg, known as the ‘Arabian risotto’ – and desserts. It is also ground with coffee beans to make the region’s emblematic qahwa (coffee).

Thanks to its intense aroma, cinnamon is used as a flavouring agent for both sweet and savoury dishes. It is also employed in the production of pharmaceutical products and other derivatives.

It is often used to complement lamb, in recipes such as Moroccan lamb tagine; Iranian khorak; and the Jordanian dish, mansaf.

Another of its most famous uses is as a delicious sweetener in beverages, such as India’s famous chai tea.

This spice, originally from India, has been one of the most widely used since time immemorial. In the Middle Ages it was so highly valued for its spicy taste and exotic aroma that it was used as a tradable currency. Today it is considered one of the world’s most essential spices.

It is used in countless recipes that include vegetables. meat, and legumes. And, of course, it is often included in spice blends, such as bahārāt, typically used in Middle Eastern cuisines.

With its penetrating aroma and unique flavour, cumin is an essential spice in the preparation of recipes such as traditional tajine, chickpea hummus, Arab-style stuffed eggplants, and a long list of legume-based dishes.

The warm, sharp, and pungent taste of cumin makes it a vital part of ras el hanout, a spice mix from North Africa that has spread from Morocco throughout the Maghreb to the Middle East.

Since its commercialisation, the clove tree has been cultivated in tropical coastal regions around the world, including Indonesia, Sri Lanka, India, Madagascar, Tanzania, and Malaysia.

Cloves are used as a spice in the preparation of a wide variety of dishes. Their strong aroma and spicy-sweet flavour give a kick to kabsa, a rice and meat dish from Saudi Arabia.

Thanks to its light orange colour – like that of saffron – nutmeg is widely used across the Middle East to give a dash of colour to a wide range of dishes.

Considered both a spice and a herb, depending on whether the seeds or the leaves are used. Coriander seeds evoke sandalwood and orange, due to their woody aroma and citrus tang. The leaves have a similar flavour to parsley, with a hint of menthol and citrus. Its roots are employed in some of Middle Eastern cuisine’s spiciest recipes.

Plenty of dishes include this spice, including tabbouleh, one of the most popular salads in the Arabic world.

We expect we’ve left you hungry with this blog post! And hopefully we’ve given you a taste of the wealth of flavours in Arabic cuisine. If you’d like to know more about the most popular spices among fans of Arabian gastronomy, get in touch and we’ll be delighted to share our catalogue with you so you can view our entire range of organic spices and spice blends. As suppliers of organic spices, we care deeply about human health and the environment. Find out more about us by clicking here.

If you liked this article, you may be interested in checking out “All About Halal Meat”, where we take a look at the benefits, characteristics, and varieties of Halal meat.