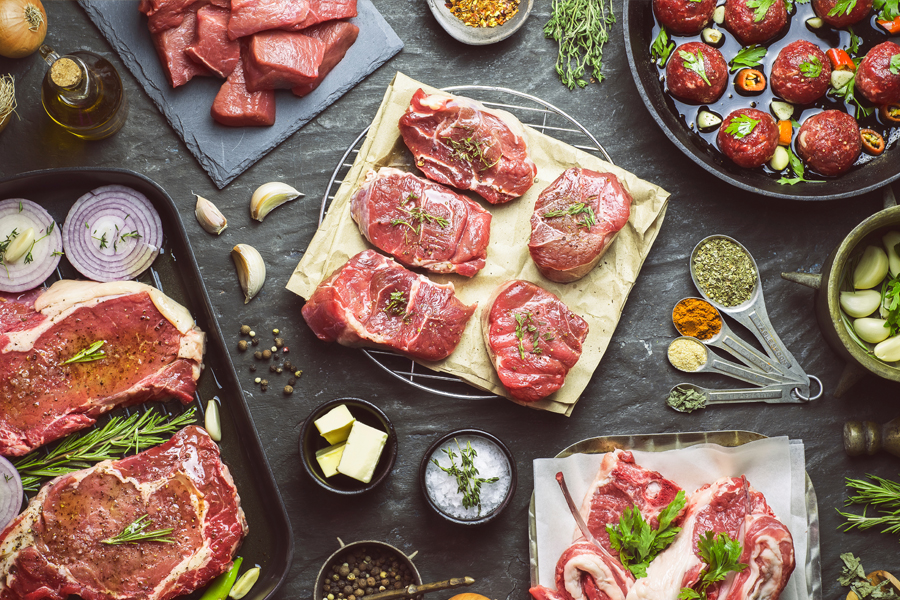 People often debate whether halal meat is healthier than conventional meat. Some talk about the benefits that eating halal meat can provide. Others choose it as a first step towards becoming a vegetarian. In this blog post, we explain what halal meat is and what it isn’t. We also delve into the benefits that this type of meat, respectful of traditional Islamic law, can offer Muslims and non-Muslims alike. Finally, we look at the main varieties of halal meats and cuts.

If you’re not sure what the term ‘halal’ means, or you’re curious to find out more about halal meat and charcuterie, check out our blog post on the subject: “Everything You Need to Know About Organic Meat and Halal Meat”, where you’ll also learn about the differences between conventional and organic meat.

What meat is not halal?

As we outlined in our previous blog post, halal foods are those that are not classed as haram in Sharia law – the Islamic law that includes all the commandments of Allah relating to human behaviour. Haram foods include pig-meat; any animals that have been slaughtered incorrectly; carnivorous animals; animals that contain ethanol, other toxins, dangerous foodstuffs, or blood; or animals that have been contaminated in some way, and so on.

What are the benefits of halal meat?

Price: How much does halal meat cost?

An exact price is tricky to establish because there are so many factors that can increase or decrease the price of the product, such as the type or cut of the meat, the country of origin, and so on. Nonetheless, there are often price benefits to be found when comparing halal meat with organic meat. For a product to be considered halal, the slaughtered animals must have been allowed to graze freely and not been treated with hormones or antibiotics.

Qualities: What is the thickness and taste of halal meat?

Because blood is considered a toxic substance in the Qur’an, halal meat is bled out completely, making it lean and tasty. It is usually accompanied by homemade marinades fused with natural spices and free of artificial additives. The result is a high-quality product with great flavour.

Unlike animals raised in factory farming, halal-certified animals must be allowed to graze freely, whether it be on fresh grass, hay, or silage (dried and fermented forage compressed into bales). In addition, the animal must be able to move and exercise its muscles so that fat distribution is infiltrated instead of localized. The concentration of fatty acids is generally healthier in halal foods because unsaturated fatty acids predominate. This is another point of difference with conventional meat, where animals are often tied up and fed with feed.

Hormone-free meat: Is it better for human health?

Veterinarian and food scientist Patricia Sola wrote the following in Eldiario.es: “Animals should not be fed anything that contains artificial growth hormones, animal protein or blood protein because this could have come from a pig. This is a positive thing because while these feeds are efficient for fattening, they are of poor nutritional quality for the human who eats the meat.”

Rachid El Haskouri, owner of the Born Halal El Haskouri butcher shop says that “the animals must be allowed to develop naturally so that when you put a fillet on the grill it doesn’t lose water and stays the same size due to it being hormone free.”

Islam holds that all life is sacred, and that people should be grateful for everything we eat, consider food as a blessing, and give thanks to God. Therefore, animals should be slaughtered according to the Muslim ritual, facing towards Mecca and in the name of Allah. The way the animal is killed is believed to affect the quality of the meat, so the halal method involves making a quick incision in the neck to slice the jugular vein, while leaving the spine intact, minimizing the agony of the animal and allowing greater blood drainage.

According to Jewish and Muslim belief, by using this method the animal is rendered unconscious in seconds and death occurs due to cerebral hypoxia rather than blood loss.

Other types of death, such as gas stunning, electrical stunning, and so on, are prohibited.

Another characteristic of this process is that the animals must not be allowed to see the knife being sharpened or other animals being slaughtered.

What are the main types of halal meats and cuts?

Entrecote, chuck steak, minced beef, steak, and fillet are the most common.

Since it is difficult to find meat that is 100% ox meat, it’s a good idea to use tools that guarantee the traceability of the final product.

You can find stuffed round steaks; cold cuts – in slabs or slices, such as chorizo or salami; sausages and hamburgers, usually made from chicken, turkey, or beef, and commonly marinated with spinach, spices or harissa, a potent spicy sauce.

We hope that this post has helped you learn everything you wanted to know about halal meat. In our Automated Platform for Organic Products, designed for supermarkets that love the planet, you can find organic meat and charcuteries, as well as a wide range of halal products. If you’d like to find out more about products or receive personalized advice with no strings attached, don’t hesitate to get in touch.

Previous ArticleThe History, Evolution, and Characteristics of Eco-Friendly Cleaning Products
Next ArticleVegan Cheese: A Product with Benefits for Everyone