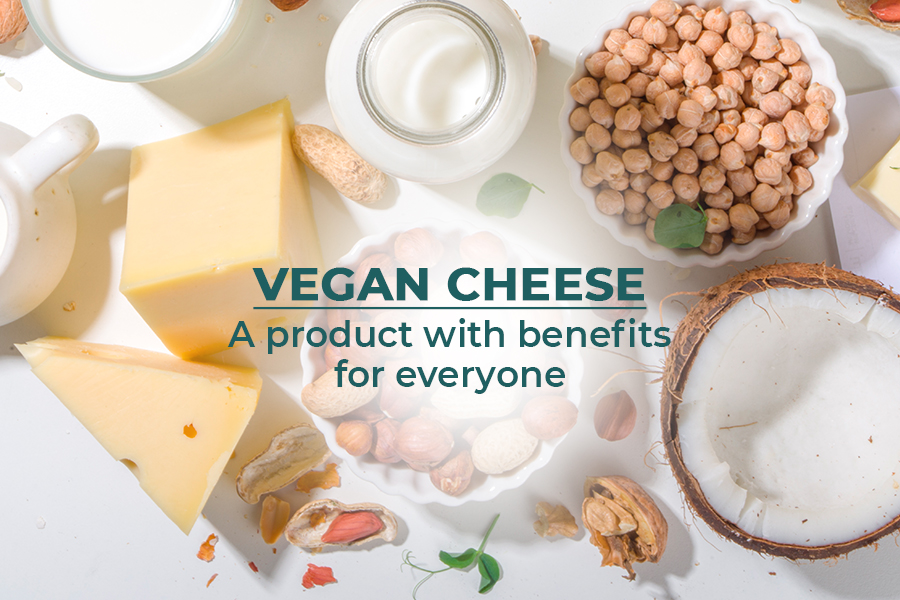 These days, vegan cheese is in high demand. What’s more, it’s a product that is constantly evolving. We travel the globe distributing the very best vegan cheeses to environmentally friendly supermarkets everywhere. In this blog post we look at what vegan cheese is exactly, what types and varieties currently exist on the market, and how to distinguish them according to their classification. We also explore production processes and the history of vegan cheese. Our goal is to help you learn more about this product which respects the environment and animal welfare while providing tremendous benefits to consumers.

What is vegan cheese?

The term ‘vegan cheese’ is usually used to identify cheeses that are 100% plant-based, i.e., that do not include animal ingredients of any kind, such as cow or sheep milk. Since the ingredients in vegan cheeses are very different from those in conventional cheeses, vegan versions have different properties. However, their flavour and texture are often quite similar. They are also sometimes known as ‘veggie cheeses’. In 2017, the European Court of Justice banned the use of the term ‘vegan cheese’ in marketing these products. For this reason, packaging often avoids using this term, employing words like ‘grated’ or ‘slices’ instead.

Although scientific evidence suggests that the origin of cheese dates to 7,500 years ago, there are writings from 8000 BC that describe a food that is made in a similar way to cheese of animal origin. But what about vegan cheese? What are the origins of this ever-more popular non-animal alternative to traditional cheese?

So conventional cheeses have been around for thousands of years, but it is only relatively recently – with the arrival of vegan awareness ­­– that ancestral fermentation processes have been reinvented to omit animal milk and instead produce cheeses from plant-based substances. These include nuts, such as cashews, almonds and hazelnuts; soy, solidified vegetable oils; and nutritional yeast. These ingredients are often combined with seasonings that enhance and provide exquisite nuances to the flavour.

There are three main types of vegan cheese, each with a different primary or base ingredient:

Despite the fact that vegan cheese was first developed just two decades ago, there is already a wide range of options on the market. These include: semi-cured cashew nuts with garlic and oil, smoked, semi-cured truffle, tofu, vegan blue block, grated Roquefort, grated Parmesan cheese, vegan mozzarella cheese, vegan cheddar, and many more varieties to captivate the palates of conscious consumers all over the world.

Being aware of the benefits of vegan cheese gives supermarkets, small stores and restaurants valuable information for undertaking sales strategies and capturing leads.

Here are a few of the main health benefits of vegan cheese:

We hope this article has taught you something about vegan cheeses. Check out our catalogue for supermarkets that want to improve processes and save time and money in their orders of organic and natural products. Or just get in touch and we’ll happily give you all the information you need, with no obligation on your part.

If you’d like to learn more about organic cheeses, check out our article ‘What Is Organic Cheese and What Are Its Benefits?’ and find out why our customers come to us for the services we offer.

Previous ArticleAll About Halal Meat
Next ArticleAuthentic Paella has reached our app!