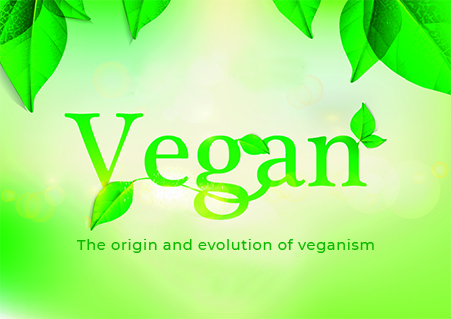 Is veganism here to stay? Or is it just a passing fad? The evidence shows that more and more people are reducing their meat consumption. And not only that: individuals are radically changing their diet to cut out all kinds of produce of animal origin, proving that veganism is far from being just another trend. In this post we’ll explore this ethical practice, and investigate its origin and evolution in the world. If you’d like to know more about the growth of veganism and see some fascinating facts and figures on the subject, keep reading!

Although millions of Europeans are opting to live vegetarian lifestyles, and more and more people are buying vegetarian products, reliable statistics can be hard to come by. The European Vegetarian Union (EVU) has asked the European Commission to carry out surveys through Eurostat, or similar organizations, to obtain reliable figures on citizens’ evolving lifestyles, and on the vegetarian product market in general. In the meantime, we’ll do our best to provide the most complete information that we can, backed up with facts and figures, regarding the massive development in this sector.

“Consumers are rapidly reducing their meat consumption as they become increasingly aware of its negative impacts.” (Euromonitor International)

In August 2019, consumer information company Numerator released data from InfoScout OmniPanel which had surveyed more than 450,000 Americans. 21% of those surveyed planned to replace all animal-based meat with vegan options within one year. In addition, 11% reported that they no longer ate any meat at all. 80% of US consumers said they wanted to replace all or some of the meat in their diet; 36% said they intended to replace a “small portion” of their diet, while 23% claimed that they wanted to substitute “a significant proportion” for non-animal products. Another important piece of data from this survey is that 47% of respondents were already consuming more vegetable-based milks in comparison to the previous year.

One of the leading countries in vegan awareness is the United Kingdom, and as such it is an indicative leader of market trends. The following statistics show the projection of veganism in the UK.

“The trend is a shift to a more plant-based diet” (Fraser McKevitt, Head of Sales and Consumers at Kantar Worldpanel)

Data provided by the Animal Equality organization on 14 March 2018, and later reproduced in a graph (reprinted below) by US website Quartz, shows the evolution of internet searches for the term “veganism” on Google over the course of two decades. The highest search interest ranking in Google Trends is 100; the word “veganism” exceeded it in 2017, whereas the word  “vegetarianism” barely exceeded 40 in that year. Today, “vegetarianism” has a ranking of around 80. 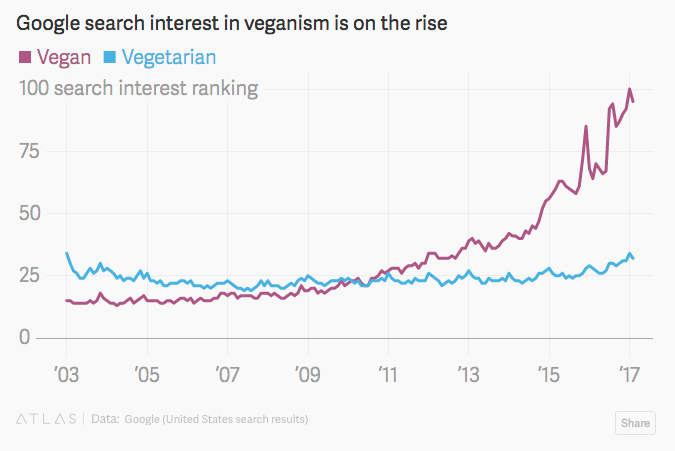 At the same time we can see the influence of this trend with the use of the viral hashtag #veganfoodshare that has already reached 13,917,391 posts in Instagram, making it one of the most widespread keywords across the social network.

In the following video published on 14 January 2018, El Vegano Cordobés analyzes the increase in the number of vegan channels on YouTube, and draws attention to the fact that in 2018 there were already 4,790,000 vegan channels with the word “vegan” in the title or description. That is 22 times more than it was in 2015, and this is without taking into account the evolution of words related to vegetarianism, which have multiplied tenfold in two years. Today, the term “vegan” is present in far more than 4,790,000 channels.

The origin of veganism

Many assign the origin of veganism to the year 1944 when Donald Watson and Elsie Shrigley wrote a newsletter called The Vegan News and founded a group who would take vegetarianism one step further by ceasing the consumption of dairy and eggs. This group would go on to become The Vegan Society, the oldest vegan organization in the world. Of course, the roots of this lifestyle and philosophy stretch back much further, since the history of vegetarianism and its variants (veganism, semi-vegetarianism, etc.) as a concept, attitude to life and ethical practice began in ancient India where they were linked to ideas of non-violence towards oneself and all beings (known as Ahimsa in the Darshanas of India). But this way of living and understanding peace did not jump from the east to the west in a single bound; it was also practiced in the ancient Greek civilizations of Greece and southern Italy.

There is no doubt that veganism has been with us for a very long time. But it’s also true that its influence has grown massively in recent decades, in both the east and west. Younger generations have much to do with this because they often have greater environmental awareness and are more actively concerned with improving their health and guaranteeing animal welfare. This impulse is something that makes us happy here at Organic Boosting, especially since we’re a company that is proud to support and work towards the Sustainable Development Goals. Our Automated Platform for Exporting Organic Products provides environmentally-friendly supermarkets with the following categories of organic products for the vegan public.

Previous ArticleHow is organic honey produced? What makes it different from – and more beneficial than – conventional honey?
Next ArticleWe continue to collaborate with the Xpande Program: 2021 Season. Destination Bahrain.