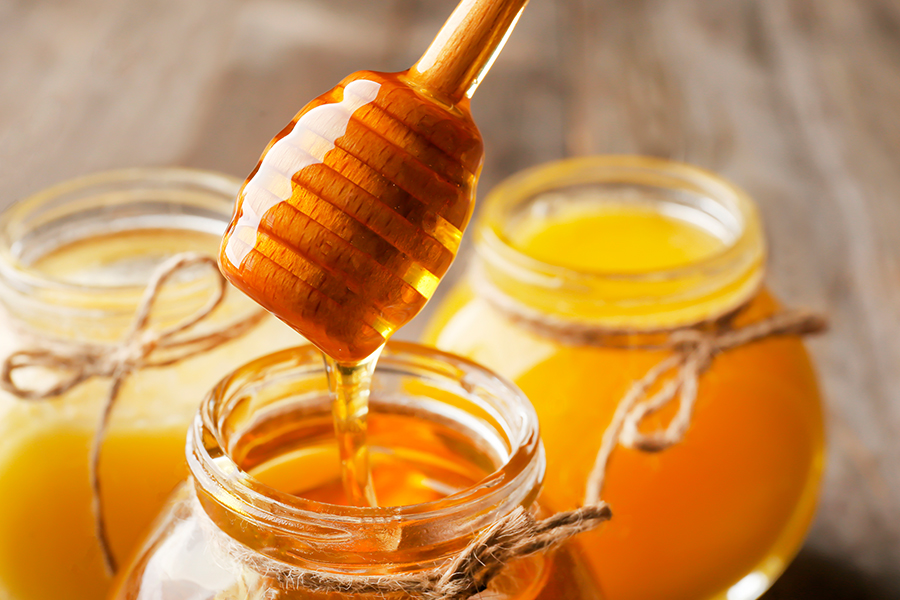 In this post we’ll explore how honey – valued by humans since prehistoric times – is made. We’ll also separate fact from fiction and explore the differences between conventional and organic honey.

Adult worker bees – at least 21 days old – extract nectar from flowers with their long tongues. If beekeepers want to obtain honey from certain flowers, they place the hives next to the species they wish to pollinate, thus obtaining honey from rosemary, acacia, and so on.

After ingesting the nectar, the bees store it in their abdomen. During this process, the pH of the honey is modified by being combined with enzymes.

Depositing of nectar in the hives

The bees return to the hive where they transfer the nectar to younger worker bees who extract it and break it down through various enzymatic digestions into simpler compounds that are rich in fructose and glucose. The mastication of the nectar takes about half an hour, during which time the moisture content of the nectar drops from 70% to 20%. In addition, the enzymes modify the pH of the honey, which is around 3.9%, making it highly acidic.

Sealing of the cells and the natural preservation of the honey

To eliminate excess moisture in the hive, bees fan the cells by moving their wings, extracting up to 80% of the excess water. The bees then seal the cells, enabling the honey to be preserved for years.

Once a long enough period has passed, the nectar fuses with the enzymes and the wax used by the bees to seal the cells. This is when the honey acquires the deliciously sweet taste that is so loved around the world.

At this point the beekeepers oversee the harvesting of the product. This requires skill and experience since the process is a delicate one and great care must be taken with the welfare of the hive and the bees.

The product collected is then decanted for a few days to eliminate the residues of wax which rise to the surface due to their lighter weight.

Differences between organic and conventional honey

There are many factors that differentiate conventional honey from organic honey. These include the quality and purity of the honey obtained, the level of care taken during the production process, the location of the hives, and so on. If you’d like to find out more about the differences between conventional and organic honey don’t hesitate to check out our post “The Benefits of Organic Honey”.

That honey is the third most-adulterated product in the world.

In 2012, a rumour that honey was “the third most adulterated product in the world” gained traction. This rumour – which became particularly popular in the USA – did not seemed to be based on any scientific studies.

Towards the end of 2014, this rumour spread to Europe, so the EU carried out a controlled analysis of 2,264 honey samples (of which 163 came from Spain). The study found out that only 6% of samples did not comply with the legal limits of sugar content. Subsequently, 893 suspicious samples were sent for further analysis using more advanced methods. 12% of these samples also tested positive for adulteration with sugars.

Internationally renowned experts such as Norberto Garcia and Rhon Phipps have noted that modern bioengineered syrups are designed and manufactured to mimic the profile of honey.

Benefits of honey in improving health

According to Dr Ron Fessenden, co-chair for the Committee for the Promotion of Honey and Health in America: “The role of honey as a functional food useful for the treatment and management of diseases is gaining momentum in today’s society. Research is being stimulated to advance the role of honey in health and weight control, while helping to prevent neurodegenerative diseases, including Alzheimer’s and Parkinson’s.”

We hope this post has enlightened you about this golden-hued universe in which Organic Boosting is proud to play its part by providing organic and natural honey to environmentally friendly supermarkets around the world.

If you’d like to find out more about our range of natural and/or organic honeys, or learn about our other products, don’t hesitate to get in touch.

Contact us and we’ll be happy to share some of the ways we help our clients save time and money, while expanding the global network of companies that care for conservation and the environment.

Previous ArticleEverything You Need to Know About Minerals, Nutritional Supplements and Sports Supplements
Next ArticleThe History, Evolution, and Characteristics of Eco-Friendly Cleaning Products